Request An Absentee Ballot By Going To:

This is where you fill out the Wisconsin Application for Absentee Ballot to request an absentee ballot be mailed to your home. Questions contact the office at (920) 439-1700

PLEASE NOTE:  When the Village of Stockbridge posts their election results, the results are only from the Village of Stockbridge voting unit.  It does not contain combined totals for the other municipal voting units (for example, Town of Stockbridge, Town of Chilton, etc.)  All municipalities are required to call in their election results to Calumet County the night of the election.  Individual school districts conduct their own Board of Canvas (double checking results) and the County conducts a Board of Canvas for positions that are a County Supervisor Level and up.  Any results that are posted are unofficial until the Board of Canvasses are completed.

Wisconsin Clerks are guided by the rules enforced by the Wisconsin Election Commission for all elections.  To be directed to their website for the most up to date information regarding elections CLICK HERE

I have received a post card in the mail regarding my Voter Registration Status…what does this mean?

The purpose is to identify people who are registered but have not voted in the past four years, and remove them from the list if they do not wish to remain registered.

The number of postcards mailed every two years varies greatly, depending on whether it follows an election for President or for Governor.  In 2013, the state mailed nearly 300,000 postcards to voters, compared to nearly 100,000 postcards in 2015.

In 2016, Wisconsin joined the multi-state Electronic Registration Information Center (ERIC), which provides the state with additional tools to identify voters who may have moved or died out of state.

More information about the four-year voter record maintenance process is posted to the Commission’s website: http://elections.wi.gov. 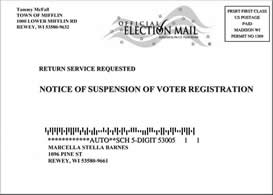